It’s got solid performers up and down the lineup, including Misty Rowe, the sizzling little lambchop of Hee Haw fame who was born to be catapulted into the air by Martin.

One example will capsulize how nothing seems capable of going wrong in this production. In Whatever Lola Wants, Miss Rowe plays a Latin American bombshell, a sort of 1950’s version of Charo, trying to seduce the innocent young ballplayer, Joe Hardy. During her partial strip-tease, she takes one of her frilly garments and tosses it backward between her legs, so that it sails over Joe’s shoulders and makes a perfect three-point landing on the wall hook. Not since Astaire made his can fly across the room into an umbrella stand has there been a neater toss 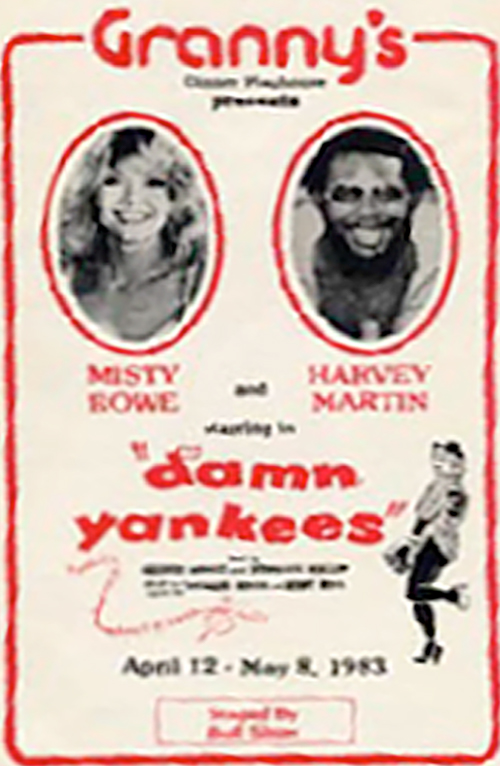 A baseball team in bad shape. Shurr has played fast and loose with the book by George Abbott and Douglas Wallop, replacing all references to the Washington Senators, the worst team of the 1950’s, with the words Texas Rangers. So here’s the plot, modified for 1980’s audiences.

Joe Boyd, a rotund and rabid Ranger fan, gets so desperate for a winning team that one night he cries out that he would sell his soul for one Ranger power hitter. He was speaking figuratively, of course, but the Devil (Harvey Martin) is a literal kind of guy, and so he shows up to collect. They strike a deal: Boyd will be transformed into a svelte young baseball star and allowed to help the team defeat the Yankees for the American League pennant But he can only keep his soul until October 1, so if the season should end on October 2, he’ll need to make a choice between the World Series and Perdition.

There are a couple of complicating factors. One is the wise-acre woman sportswriter who begins investigating the murky background of this All-American slugger who seems to have materialized out of thin air. And the other is Lola (Misty Rowe), whom the Devil has enlisted to seduce Joe, and keep his mind off such distractions as the wife, armchair, and refrigerator full of beer back home. In true American style, it all comes down to The Big Game, and the lure of glory as opposed to the call of duty.